Beate Andrees is Head of ILO’s Special Action Programme to Combat Forced Labour. You can follow her on Twitter at @beateandrees

Tomatoes were once grown by indigenous people in the Andes and then exported to Europe and North America by Spanish colonizers. And while the delicious fruit has found a home in many parts of the world, many of the workers who pick it have not. Many are irregular immigrants, tolerated because they provide cheap labour, but not welcomed.

One of the most prolific tomato growing regions is the state of Florida in the United States, the area focused on by film director Sanjay Rawal and actress/producer Eva Longoria in their film Food Chains. It tells the story of a group of courageous migrant farm workers resisting their exploitation.

This article was originally published on HuffPost Impact. 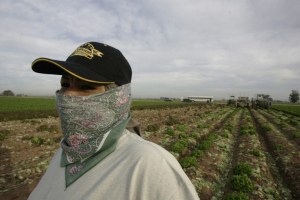 Globally, agriculture is one of the high-risk sectors into which workers are trafficked for the purpose of forced labour. Find out more about ILO’s work to end modern-day slavery.

It sounds like a struggle fought by many workers across the world, and in particular farmworkers. They are often low-skilled, seasonal and unorganized. In the U.S., over half of them are estimated to be irregular immigrants and hence risk deportation if they complain about their exploitation.

In addition, the National Labor Relations Act excludes agricultural workers from the right to join trade unions and to bargain collectively, and only a few U.S. states have enacted legislation to that effect. With the ready supply of largely unskilled migrant labour and without the presence of trade unions, wages are kept artificially low. If combined with threats, intimidation, illegal wage manipulations, debt bondage or other coercive practices, such exploitation can turn into forced labour.

Globally, agriculture is one of the high-risk sectors into which workers are trafficked for the purpose of forced labour. According to the International Labour Organization’s most recent estimate, illicit profits generated by forced labour amount to $150 billion per year, of which an estimated $9 billion is made in agriculture.

The Coalition of Immokalee Workers, the heroes in Food Chains, has pressured major retailers to support the Fair Food Program, which has helped prevent slavery-like practices on U.S. farms. Their campaign has contributed to a wage increase for farmworkers, after major retailers agreed to pay a penny more per pound of tomatoes and to stop buying tomatoes from farms with human rights violations.

According to the International Labour Organization’s most recent estimate, illicit profits generated by forced labour amount to $150 billion per year, of which an estimated $9 billion is made in agriculture.

But more is needed to protect the rights of workers, especially if they are migrants. According to the recently adopted ILO Protocol on Forced Labour, 2014, states should take measures to support due diligence by the private and public sectors to respond to the risk of forced labour and to protect workers, in particular migrant workers, from fraudulent recruitment practices.

There are lessons to be learned from the success of the Coalition’s campaign for fair wages: ultimately, workers themselves will drive change and their collective voice is a powerful catalyst for change. Workers’ organizations need to be recognized as important players in preventing forced labour and in empowering workers at risk.

Another lesson is that business is part of the solution. U.S. food chains are highly integrated with a handful of large firms being able to influence farm-level production, prices and working conditions. Dialoguing with key firms in these chains while raising public awareness can bring about positive changes in farm workers’ rights and working conditions.