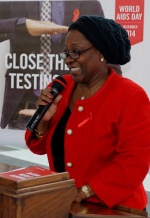 Heavy trucks pass through the Chirundu Corridor, one of the major routes connecting Zimbabwe and Zambia in southern Africa. This is a vital transport artery, important for the economies of both countries and their neighbors. It is also a major route for the transmission of HIV.

The mix of long-distance lorry drivers — who go weeks at a time without seeing their families — with widespread poverty existing along the corridor, results in sexual encounters between drivers and women. The risks they take with their health have an impact on the wider community.

But things are changing, in large part due to the recognition that productive work, and with it, economic empowerment, are important weapons in the fight against AIDS.

On one of my field trips to Zimbabwe, I had the chance to meet Barbara, a young woman who lives along the Chirundu Corridor, where she runs a business making doors and windows. Her company prospered after she received training in business management, and she was given access to credit facilities through an HIV project run by the International Labour Organization, the UN agency responsible for setting international labor standards.

The UN estimates that more than half of the 35 million people living with HIV worldwide do not know that they are infected. Many fear being discriminated against if people find out they are HIV-positive.

The project was founded on the recognition that, in addition to traditional prevention strategies, such as condom use, the underlying causes of risky sexual behavior need to be addressed. Additionally, there needs to be widened access to HIV services if the next generation is to be AIDS-free. 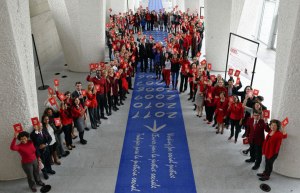 Learn more about ILO’s work to combat the HIV/AIDS pandemic in the workplace.

Barbara employs 10 men from HIV-affected households. Her business is helping to reduce the economic vulnerability of others in her community.

Many other women living along the Chirundu Corridor have also started or improved their businesses and have become economically independent. Beyond bringing them economic security, significant changes have been noted in the behaviors — and the general welfare — of the project’s beneficiaries. They now have access to better information and HIV services. According to a survey on the impact of the project, small successful businesses are flourishing, children are going to school, mothers are being kept alive and the number of women who have stopped engaging in unprotected sex has risen from 56 to 76 percent.

However, results like these can only be reached if stigma and discrimination in employment, education, health care and other settings are tackled at the same time.

Discrimination against people living with HIV is not an issue that exists only in southern Africa. We see it worldwide, in both developed and developing countries. In many instances, people lose their jobs because of it. This, in turn, makes them and their families more vulnerable.

The UN estimates that more than half of the 35 million people living with HIV worldwide do not know that they are infected. Many are afraid of getting tested because they fear being discriminated against if people find out they are HIV-positive. As a result, too many people are not seeking the treatment they need, and they risk passing the virus on to others.

The vast majority — over 90 percent — of those who are living with or are affected by HIV, either work for a living, or have links to the workplace. Through the workplace, we can reach these people, their families and communities with HIV-related information, treatment, care and support services. In the same way, the impact of efforts to eliminate HIV-related discrimination in the workplace environment will have a ripple effect beyond the workplace that will affect larger society. The fact that Barbara employs HIV-positive men in her business not only provides them with vital income, which will help make their families less vulnerable, but it also sends a powerful message to her community that people with HIV should not be discriminated against.

The UN has set 2030 as a goal for ending the AIDS epidemic. Seeing how people’s lives are changing in the Chirundu Corridor makes me believe that the goal can be reached if we include the workplace as an essential component of that vision.

1 thought on “On the Road to Ending HIV”