By Philippe Egger, Director of the ILO Bureau of Programming and Management

With all eyes on the unfolding Eurozone crisis and its dramatic social consequences, are there any lessons to learn from Ireland?

Ireland is a stark illustration of people paying in jobs, income and social duress for the cost of financial profligacy. But its handling of the crisis also holds some lessons for other members of the Eurozone seeking to regain competitiveness with a degree of fairness.

Ireland was one of the countries hardest hit by the Eurozone crisis. The 2008 bursting of the real estate and banking bubble was followed by an explosion of sovereign debt when the government rescued banks and took on defaulting loans at a cost of some 40 per cent of GDP. The fall in prices and drying up of credit pushed the economy into recession. 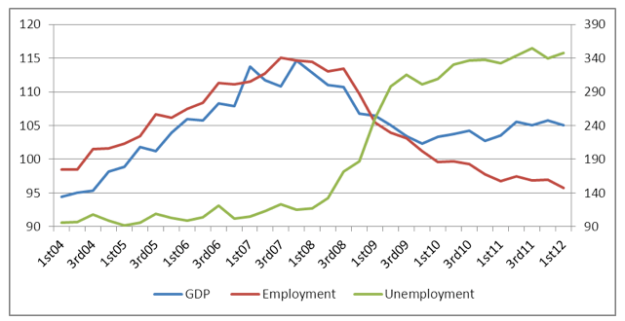 The government tackled the crisis aggressively, setting the short-term priority of balancing a budget laden with bad bank loans, and pursuing a policy of “internal devaluation”, aimed at regaining competitiveness through a significant decline in prices, including wage costs. Early signs of a weak rise in exports suggest that this is having some effect.

But the social cost has been staggering.

Ireland did, however, take a series of measures aimed at mitigating the painful side effects of the recovery efforts.

In particular, there are three areas where lessons can be drawn from the Irish experience.

These measures may inspire other crisis-hit countries in Europe looking for  ideas on how to ease  the pain inflicted by the crisis and the austerity measures aimed at battling it.

4 thoughts on “Is Ireland a case of socially responsible adjustment?”