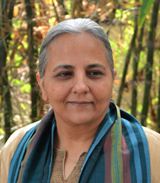 Reema Nanavaty, SEWA Director and member of the ILO Global Commission on the Future of Work ©SEWA

Does organizing informal workers into their own cooperatives help them? Most certainly. Let me tell you about two poor salt-pan workers from the Little Rann of Kutch (LRK), Gujarat, India; Bhuriben and Samiben.

Bhuriben, a salt-pan worker for more than 25 years, told me what life was like before her cooperative. “At the end of a season, a salt-farmer would be hardly left with 5,000 rupees (US$ 73) to support her family for the entire year.”

So, life was very tough for Bhuriben and over 16,000 salt-pan workers like her in the LRK. They faced two big problems – lack of direct market access that led to exploitatively low prices offered by a traders’ cartel, and the cost of the diesel fuel to operate the pumps needed for salt-farming.

Then, in 1998 something changed. India’s Self Employed Women’s Organization (SEWA) got involved. SEWA brings together more than 1.5 million poor, self-employed women who work in the informal economy. Bhuriben told me what happened next.

Next, the women’s new cooperative federation, with SEWA’s help, set about addressing the second problem, the cost of running the diesel pumps needed for salt-farming. Through the federation, which is owned and managed by the salt-farmers themselves, and with SEWA’s innovative financing mechanisms, they got access to solar pumps; in other words green, renewable, energy.

For me, the crucial point is not just that this brought down the operational costs of salt farming but that it helped create an asset for the poor women workers, and I strongly believe that asset creation is the surest way to fight poverty. Don’t take my word for this, listen to Samiben, another SEWA member in LRK.

“I purchased a solar-pump through my federation two years ago. We are able to save five barrels of diesel and our salt production has also increased by 150 tons. Despite repaying the loan for the pump, we are now able to save an additional 15,000 rupees (US$ 218).”

“In the next three years, we will completely pay off the loan and the pump set will become my own. Then our income will become five times my current income and life will become better.”

Their cooperative is now a mature 20 years old, and the benefits it has brought to the women of LRK are clear. What’s more, you and I have benefited too, because the switch to green energy has reduced their carbon footprint. Truly, a win-win result, thanks to cooperative organization.