Usman Bilal, a former child labourer, is an MBA student and child-labour activist.

When I was young, I lived in my village in Pakistan with my father, mother, three brothers and four sisters. My father was a carpenter and he worked hard to build a bright future for his family, but his income was too low to make this possible.

So, in 2001, when I was just ten, my parents sent me far away, to my maternal uncle’s workshop in the village of Bhagwal Awan, in the district of Sialkot, to make surgical instruments. I didn’t want to go, I wanted to stay in school and study, but I had no choice.

As a young boy, Usman was sent to work at his uncle’s workshop to help his family make ends meet.

I earned 500 Pakistan Rupees a month (about US$ 8.00) and I knew that made a real difference to my parents. But the work was hard. Every day I got painful cuts on my hands. My spirit was broken and I felt my future had been snatched away. All I could do was pray to God for a miracle.

Then, after about a year, someone from the ILO came to my uncle’s workshop. He persuaded my uncle to send me, and some of the others, to the Non-Formal Basic Education Centre.

The ILO was starting a project for child workers, offering them free education. So every day, I went to work from 8 a.m. to 3 p.m., and then I went to study at the Centre for three hours. The teacher was very kind and the classes were good. When the time came for my first primary level exam, I came out at the top of my class.

Because of this success, the ILO talked to my parents and persuaded them to let me return to formal schooling. As well as pursuing my education, I began to work as a social activist with the ILO and the Bunyad Literacy Community Council. I never missed a meeting on child labour and children’s rights!

In 2004, I was invited to be a child delegate at the first World Congress on Child Labour, in Florence, Italy. I also took part in the Global March against Child Labour. The next year I went to the second Congress, in New Delhi, India. People started to notice my work against child labour. I received awards, including a Student of the Year Award from the Education Minister of Pakistan and a Leadership Award from the Prime Minister of Pakistan.

Now I am studying for my MBA!

None of these achievements would have been possible without the ILO and its work fighting child labour. It changed my life forever. I know I still have a lot to do, because there are many more children like me out there, waiting for help. 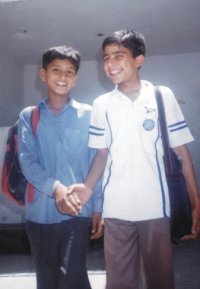 Usman’s early education consisted of three hours of school per day after a seven-hour shift at his uncle’s workshop.

I have a plan. First, I will go back to Italy to complete my higher education. Then I want to work with the ILO against child labour, by creating a model company that manufactures surgical instruments. I’ve already registered the company’s name, CARE WAY.

My company will be an example for all, worldwide. The working environment will be friendly, with no child labour! People will see that, thanks to the ILO, a ten-year-old boy has grown up to become the Chief Executive Officer of his own company.

The ILO has been a light in the dark for me. I’m proud to be a part of its work.