Rahel was confined for more than two years in her employer’s home in Beirut, 13 years ago.

She explained that for six months her only contact with any person outside her employer’s immediate family was through hand signals across the roofs to another woman. After some time she realised she could converse with some Sudanese kitchen workers in a hotel that backed onto her employer’s house. Through a sealed window she established her first verbal contact beyond that of the “madam’s” family, but she never saw their faces.

Now, like many seasoned migrants, Rahel has several cell phones. I met her in the Migrant Community Centre in central Beirut while researching the potential for mobile phones to improve the lives of migrants who come to the Middle East to work as domestic workers or in the garment factories.

I wanted to discuss what at first sight seems to be an impossible problem: How can you reach someone trapped in a house without identity papers, whose presence is known only to the occupants, and who isn’t allowed to talk to anyone other than the immediate family? How could a mobile service do anything to address the needs of young women living in enforced isolation, whose phone, if they had one, was likely to have been confiscated along with their passport within hours of their arrival in the country? I met migrants who were told they would be killed if they were caught with a mobile phone; so what sort of intervention could possibly help?

Some clues lie in the bare facts surrounding Rahel’s experience. Even in extreme isolation, humans can find ways to communicate. What matters is that in almost every migrant’s life there appear narrow cracks through which information can flow. Some of these are planned, like the woman from Kerala who was allowed out once a year at Christmas, and some are opportunistic – several migrants told me that on the first opportunity of going to the market they had pounced on the chance to get a SIM card. 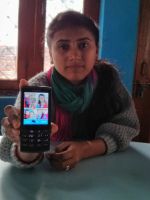 A migrant worker from Nepal shows off her smart phone.

Some women with leadership qualities have developed community groups, usually based around their culture and language, whose membership they grow assiduously. This, combined with the rapid shift of mobile phones from high cost luxury items to cheap devices for everyone, and lately to powerful pocket computers with inexpensive data access to the internet, has greatly extended the ability of a community to self-organise. Free mobile internet services make it easy for communities to share information in real time and at virtually no cost.

What seems to be happening is that the rapid rise of mobile social networking makes it easier for those in relative freedom to cascade information down to women whose freedom is far more restricted, but who can occasionally receive a message. As a result, even the most excluded can find out about the existence of a given community, and the fact it may be having a meet-up on their country’s national day. When a domestic worker with a hidden mobile meets another woman who doesn’t have a phone, the messages from her community that she has received have a chance to flow to into the most insular homes.

Malcom Vernon worked as a consultant for the UKAID funded ILO Work in Freedom Project, which aims to make migration safe for women, travelling from South Asia to work in the domestic labour and garment sectors in the Middle East and within South Asia.