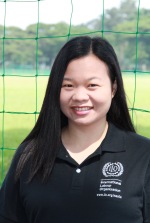 The referee blows the whistle, indicating that the match is about to start. As I help my 10-year old son put his goalie gloves on, I recall the time he asked me about children working with dirty hands.

It was five years ago. I had just returned from a field visit to an ILO project in Camarines Norte, Philippines. As I was unpacking, he saw some pictures I had taken of children working in gold mines.

“Why are those children working with dirty hands, Mama? I have clean hands and a nice watch but they don’t. Why are they not in school?”

I struggled to find the right answer. How could I explain to him that children as young as five years old work and put their lives in danger?

And then I thought of our own family. At 13, my father worked in a poultry farm. He cleaned houses as a child domestic worker. When my husband was 12, he washed cars and jeepneys (public transport) late at night to earn a few pesos for his family.

At one point in my life, I had asked my father if I could work and study at the same time. He said no. One thing was to help around the house, which I did, but to go out and wash dishes for long hours while jeopardizing my studies was something he was not willing to let me do. And he was right.

My husband was not so lucky. He still regrets not being able to play football when he was a child because he had to work.

In the Philippines there are approximately 3 million child labourers. Last month, the ILO teamed up with the National Child Labor Committee and other partners to organize an event with some 200 former child labourers. We wanted to offer them the chance to play football, to learn and to enjoy their childhood.

I was there, and it was great to see their smiles as they got their football jerseys, shoes, balls, plus school supplies and other treats. Many individuals, companies and organizations donated their time and resources to make this day happen. Artists, singers and athletes came along to hold up the Red Card to Child Labour. Government, employers’ and workers’ organizations, along with ambassadors and heads of the United Nations in the Philippines were present as well. It was one big team working together against child labour.

Many have joined the cause since then. This week, the international community is getting together in Brasilia for the III Global Conference on Child Labour. It will be a great opportunity to give a big push to the goal of eliminating the worst forms of child labour by 2016.

As the whistle blows again and my son’s match finishes, I cannot help but think that my family is part of a bigger team fighting to beat child labour. It’s a great feeling to have.

4 thoughts on “A big team with a clear goal”