When news of the first cases of the Ebola outbreak started filtering out of Guinea and Sierra Leone in late 2013, it received little media attention—even here in West Africa. The affected villages were so remote that most people assumed it would be easy to contain.

As someone who travels frequently to Freetown (Sierra Leone), I took a special interest in the news. The village of Kenema, now thought to be the epicentre of the outbreak, was formerly the site of an ILO development project.

Fast forward to August 2014, the epidemic has now spread to Liberia, a country where I lived and worked for close to two years, and Nigeria, where I am currently based.

The rising number of Ebola deaths has spread panic and fear through West Africa. Tragically, many of those who lost their lives were medical personnel on the front lines of the emergency response. Their loss has dealt a serious blow to the health systems in both Liberia and Sierra Leone, which were already ill-equipped to manage a crisis of this magnitude. 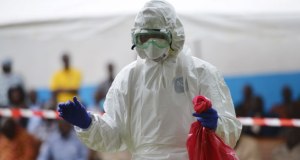 The ILO has developed over the years a wealth of Occupational Safety and Health instruments and tools which can be of use for the protection of workers against Ebola infection at work. Read the joint WHO/ILO briefing note.

To make matters worse, many health centres in Liberia are closed because their staff are afraid of getting infected. Their fears are understandable. In many cases, they lack the protective gear and training necessary to treat Ebola patients safely.

Across the region, we’ve seen growing awareness about Ebola and how to prevent it, but there’s still plenty of misinformation going around. Riots and attacks on health centres have been the result. People need to be better informed about what’s happening from sources that they trust.

In the meantime, life goes on. People continue going to work even amid a general atmosphere of disquiet. The traditional handshake and hug has given way to an uneasy wave of the hand. It’s common to see people rubbing their hands with sanitizing solution.

As the hundreds of infected medical workers illustrate, the Ebola outbreak is not just a public health emergency—it’s an issue of occupational safety and health. Doctors and nurses aren’t alone. Cleaning personnel, waste management workers, laboratory technicians and anyone else who handles bodies could also be at risk.

“Equipped with the right knowledge from a trusted source, more people can begin taking the necessary precautions to avoid getting infected.”

ILO has a long track-record of working with employers and workers organizations to protect the health and safety of workers. Programmes to inform workers about HIV/AIDS prevention and defend the rights of workers living with HIV are just one example.

For the ILO, supporting the wider response to the Ebola Outbreak will mean activating workplaces across the region as information hubs for the distribution of pamphlets and brochures. Workers themselves can help to spread that information through their own community networks.

Equipped with the right knowledge from a trusted source, more people can begin taking the necessary precautions to avoid getting infected, which will help to contain the spread of the disease.

ILO will also help to disseminate guidelines for the safe handling of patients and materials to healthcare workers, laboratory technicians and anyone else who may come into contact with them.

Our job is to work with unions, employers and governments to equip workers with the knowledge they need to protect themselves. Hopefully, that will help to save lives today as well as tomorrow, the next time Ebola rears its head.